Earlier this year, my wife and I (yes, IDROS is married…sorry ladies) watched the titular Netflix show thinking it might be good for us, as parents, to learn a little about what the youth of today may be experiencing. Also, perhaps we could glean why the series became such a viral sensation so we could seem in tune with “Non-Fake News” topical subject matter at the proverbial water cooler, or while mingling with our counterparts at kiddy parties or activities. I can’t say I hate-watched it…In all honesty, IDROS was generally entertained by many aspects of it, and found some eerie similarities to Season One of Twin Peaks (which I might just discuss in another post)…but what your author enjoyed most about the series, hands down, was the music.

Which brings me to the much more interesting event of 2017, IMHO, that plays on our triskaidekaphobia for the low and totally worth-it price of 13 easy installments of $74.99 plus whatever applicable fees and charges various sources inexplicably get away with shaking us down for these days.

And I suppose now is as good a time as any to forewarn you. This will be a long(ish) post. Not quite as long as that Lawn Boy Supreme served up on July 25…but let’s just say it might run you a deuce and a half or even two jaunts.

This Baker’s Dozen run has been extraordinary from the starting gun. Even people who aren’t phans have taken notice, and if they haven’t, they should. Phish sets the gold standard for a live convert experience. This was going to be special from the moment it was announced. 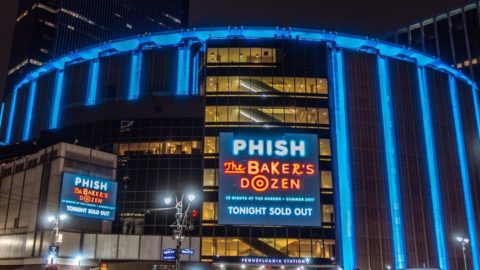 So without further ado, here is the MEAT of this post. 13 reasons why IDROS loves the foursome named Phish:

Phish – Thanks for a great three weeks, and for an amazing 35 years.

And to my faithful readers, IDROS hopes you caught at least one show during this outstanding Baker’s Dozen run.

Let’s all live while we’re young. We can still have fun!

Tagged as 13 Reasons Why, Donuts, Jimi Hendrix, Madison Square Garden, Phish, The Baker's Dozen, The Beatles, The Talking Heads, The Velvet Underground, The Who