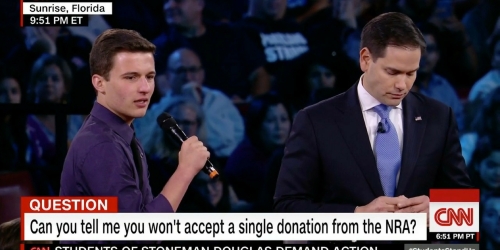 “If I believed an assault weapons ban would have prevented this from happening, I would have supported it.” Marco Rubio, CNN Town Hall February 21, 2018

We all remember the game we played as children, usually while swimming. Now imagine playing the game, but in a strange twist of fate, all the other children were replaced with doppelgangers who happened to be deaf. You call out “Marco….Marco….MARCO!” Your frustration grows as your playmates remain silent. Finally, unable to take it anymore, you open your eyes to make sure your friends were still in the pool. There they were, just as you remembered before closing your eyes. So were they ignoring you? You call out again, “MARCO!” Still silence. Like any child, you get real close and yell into someone’s ear, “MARCO!” Nothing. Finally, unable to take anymore, you grab a friend by the arm violently, screaming “Marco!” and shaking him or her. He or she responds, “what the hell? Stop grabbing me!” You begin to cry, and get out of the pool.

I am that frustrated kid. I am sure many of you feel similarly. How can these troglodytes live amongst us? Are they kidding? How did this guy get elected? How can this devil woman believe the venom she is spewing? How is this La Derrière character allowed to breathe the same oxygen I am? Can half our country really be this stupid? Why aren’t the more educated among the gun freaks not stepping in to slap some sense into their ignorant brethren? How many children have to die before things finally change? All of them? And if all of them is your answer (and believe me, after the nonsensical answers I have heard from your camp, I wouldn’t put it past you), then what exactly are you protecting with your prized guns?

And down the rabbit hole I go…again.

Look, kudos to Marco Rubio for even having the balls to show up Wednesday night. The governor and our Narcissist-in-Chief were clearly too busy polishing their extended taints (the space their testicles, which were sold to the NRA, once occupied). And good ol’ Rubio even showed sense enough to concede a few points…albeit minor points…on every White Supremacist’s favorite Constitutional Amendment. But look at his quote again (“If I believed an assault weapons ban would have prevented this from happening, I would have supported it.”) This is so insulting. How can you know if such a ban has never been enacted? Who cares what you believe? Facts save lives. Not beliefs. This is the same BS-laden venom anti-vaxxers spew that puts children’s lives at risk. And how dare you look the very children who miraculously survived the Rambo-like blitzkrieg of an assault weapon carrying 19-year old, and spew that garbage. YOU HAVEN’T TRIED EVERYTHING YOU CAN TO SAVE LIVES! And you know how IDROS knows this? BECAUSE YOU HAVEN”T ENACTED A LAW THAT MOST LIKELY WOULD HAVE PREVENTED THAT 19 YEAR OLD D-BAG FROM BUYING THE ASSAULT WEAPON!

In a recent Facebook post, when I called Bullshit on the NRA and their supporter’s entire platform vis-a-vis guns, many of my faithful friends and readers asked me…”So now what do we do?”

Below is IDROS’ playbook (this is not exhaustive):

Marjory Stoneman Douglas once said: “Be a nuisance where it counts. Do your part to inform and stimulate the public to join your action. Be depressed, discouraged, and disappointed at failure and the disheartening effects of ignorance, greed, corruption and bad politics—but never give up.”

Let’s honor her, and the brave students and faculty at her namesake school, by doing all we can to move the needle. We must not let these precious lives…any of them, from any of the tragic shootings of our past…be lost in vain.

As always, thanks for reading. Please share, and if you have any clout with the Teachers’ unions, the NEA, the Department of Education, the PTA, etc…let’s make this a MARCH to remember. Our children are counting on you.

Please let IDROS know if you have any other ideas to share that might help save lives.